I’ve recently felt very nostalgic about my past trips to Alaska. I really do hope to go back and fish there again someday, but I also understand greater now that I won’t be able to do what we did 10 years ago ever again.

George Mann was a friend of my father and an accomplished outdoorsman. That actually might be selling him a bit short. Around here, and even in Alaska, he’s a legend. He held at least 21 IGFA fly fishing records, but surprisingly that’s not where he made a name for himself. He accomplished his notoriety in hunting exclusively with bow and arrow and holds many more records and accomplishments in that realm than he did in fishing. Consequently, these accomplishments landed him in the Alabama Sports Hall of Fame, and many of his accomplishments are on display at the Mann Wildlife Learning Museum at the Montgomery Zoo. 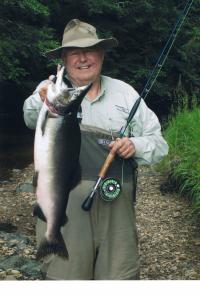 Bow hunting for grizzly, brown, black, and even polar bears is what brought George to Alaska, but it’s not what kept him there. For decades he went to a special place in Southeast Alaska that only he knew about to fish the late summer salmon run. He invited my father and me along several times, and the experiences were truly life-changing.

George passed away two years ago, and for what we know the locations we fished and how to get there went with him. We’ll never be able to go back even if we could find it on a map. Losing George meant losing that opportunity forever.

That gives me all of the motivation to move forward by going back — in my mind, pictures, and videos. I’m hoping that telling the story — if only to myself — will help keep him and the adventures we had alive in some way, and if nothing else spur me into growing as a fly fisherman through narrative and reflection.

George taught me how to fly fish. I’d certainly consider him a mentor even though no one would confuse me with being his protege. While these stories will certainly be an ode to him in many ways please don’t mistake this as an attempt to tell his story in any way. There are others who knew him better than I did that are more qualified to do that.

This space and the writing that falls into it is for me. I don’t plan on promoting it because I really want to have the luxury of posting something that sucks or is grammatically incorrect or is plain flat-out poorly written.

Welcome to Tales from East Yahtam.