As you could probably tell by my last post, I was fortunate enough to get out on the water and use some of the flies I’ve tied over the past few weeks. Most of the flies I’ve tied had some preliminary tryouts during our midnight outings in the boat; however, I was unable to hook anything during those attempts.

Fortunately, this weekend provided a great opportunity to take advantage of fishing a small farm pond back home in east Alabama. The best part about going was that I didn’t have to wait until 10 pm to get out on the water. I’d almost forgotten what it was like fishing during daylight hours. 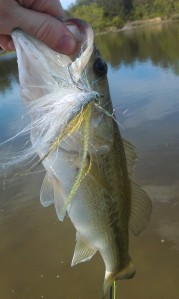 Saturday was definitely a day for woolly buggers and streamers (is that kind of redundant? I don’t think so).  Even though the water was warm, the bass really weren’t that shallow. Top-water poppers really weren’t getting much response, but as soon as I tied on a black leech or sinking minnow the bass were all over them. From what I gathered,  5 was the magic number. The bass really started hitting as soon as the fly went to or beyond the 5′ mark.

The outing didn’t produce any monsters, but the fish were definitely plentiful. Everything caught was in the 0.5 lb-2 lb range, but once you’re in the double-digits then you’re just having fun and size doesn’t make a whole lot of difference. No doubt the bass are in pre-spawning patterns. The were extremely active, and were definitely attacking the lures, not just bumping.

I’ll be really interested in seeing if the fish back in Nashville start to move into the same patterns soon. I believe that as the weather stays consistently warmer, and the larger bodies of water warm up the bass will be easier to come by.

Check out some other pictures from the day: