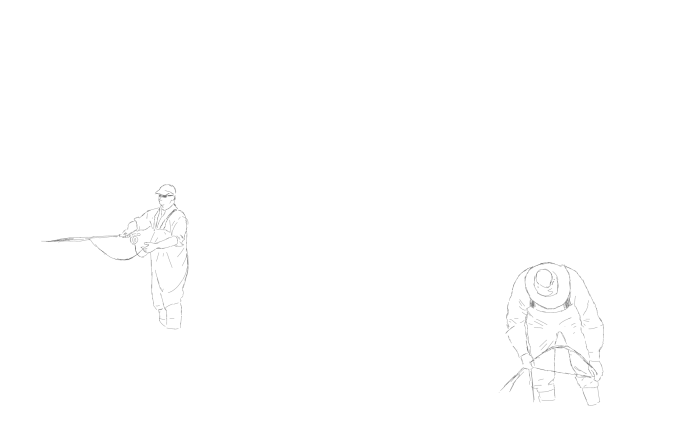 During our first trip, we unpacked all of our gear and prepared our rods for the next day. A friend of ours had insisted we bring along two of his top of the line rigs for our fishing trip. These were Orvis outfits that came in “fancy” rod tubes. I wasn’t as savvy back then as to what gear was what. All I knew was that my Cabela’s brand setup (rod, line, reel, etc.) probably cost a few hundred bucks less than the rod in one of the Orvis rigs. It was only proper to bring along the finest outfit to catch the finest Salmonidae in Southeast Alaska.

“That ain’t gonna cut it, gentlemen.” George politely informed us, “those reels are gonna get turned inside out by the first fish you catch. Not to mention if the right (or wrong) fish gets hold of your fly those rods might break.”

At the time I thought he was trying to tell us that the gear was overpriced and not well made. In my mind, it’s still up for debate whether it was or it wasn’t, but as I’ve matured as a fly angler since then I can see it really had more to do with inexperienced anglers than the gear. It didn’t take long for us to prove him right either.

We walked down the path, past the latrine, and up to the first pool where the river and the sometimes-a-creek met. Unless it was high tide there was a decent amount of casting room, and Dad and I slung our lines around trying to get back into the groove of casting a fly rod. It had been some time for me, and this was probably his first time for him since he was a kid. The learning curve was steep, but the fish were forgiving.

Cast after cast of tailing loops, wind knots, and snagged backcasts still didn’t result in a skunking for either of us. Pink salmon were thick in this pool, and you’d sometimes see them up near the surface just holding in place waiting for the right time to fight their way upstream. We’d bomb cast after cast onto the water’s surface, but every so often a nice 2-3 lb fish would get stuck on our brightly orange colored egg patterns or purple leeches.

To this day I don’t remember the specific reels we used, but George wasn’t wrong. These were small-medium sized arbor reels with no drag system and the first salmon that took my fly all but spooled me, and then broke the leader. I had zero experience playing a fish that size on a reel that small and it showed.

I was in good company though. It may have been Dad’s second or third fish, and as he’s strong-arming the line back to him to bring this nice sized pink salmon back to the bank we suddenly hear a loud SNAP! Flashbacks of a few days before flood into my memory. This time it wasn’t nearly as serious.

I look up and Dad only has half a rod in his right hand while the line is furiously rushing upstream. Determined as he is, he continues to pull fly line with his left hand. Not long after he’s able to retrieve the broken portion of his rod, and the next thing that I realize is he’s got two pieces of a fly rod in his hand and a 4 lb fish flopping around at his feet. I’d say the fancy Orvis outfits lasted both of us a cumulative 2-3 hours before both were inoperable.

We begrudgingly gathered up our broken gear and trekked back to camp to pick up the extra $100 house brand fly outfits we brought with us. George wasn’t wrong. In Alaska, it’s always best to bring two of everything.